Cogeneration is the process of generating both electrical and heat energy from a single fuel source.Â  Also known as Combined Heat & Power (CHP), cogeneration makes use of the commonly discarded thermal energy which is generated from the combustion of fuels such as diesel, natural gas, bi-fuel, and even heavy fuel oil (HFO).Â  The entire CHP process revolves around fuel-driven electric generators, and the heat derived from their engines.

An electric generator is a commonplace piece of equipment that converts mechanical energy into electrical energy.Â  In the case of cogeneration, combustible fuels are used by an engine or turbine to create the mechanical movement by which electrical charges are â€˜pushedâ€™ through an external electric circuitâ€”thus, providing electricity.Â  Anyone who has been near an engine that has been running for some time would know that engines get hot when they run.Â  However, while electric generators are used in nearly every industry, and for a wide variety of reasons, most make no use of that heat energy.Â  Enter, cogeneration.

Though cogeneration is not employed in the majority of power generation scenarios, ironically the worldâ€™s first power plant was in fact a cogeneration plant!Â  Thomas Edisonâ€™s famous Pearl Street Station was the very first power plant, and is a great example of the basic concept behind CHP.Â  Originally activated in 1882, the plant utilized 175 horsepower steam engines to generate both electric and thermal energy, while also using the excess heat to warm neighboring buildings on the same block in Manhattan.Â  Still, this power plant is said to have been operating at only 50% efficiency.

Today, a standard power generator operates at 35% efficiency when cogeneration is not being used.Â  Thatâ€™s a lot of wasted energy.Â  However, modern cogeneration plants can operate with an efficiency as high as 80%.Â  This means that less fuel is needed to produce the same amount of energy.Â  Itâ€™s not just efficient from a financial standpoint, but also from a green point of viewâ€”CHP dramatically reduces the carbon footprint of power production.Â  So, how is the heat energy captured and put to work?

One of common use for the heat byproduct of generators is water heating, however the uses can be custom tailored to the industry using cogeneration.Â  For example, a paper mill with on-site power may use heat power for the drying of paper, while a chemical factory might use their heat for cooling via an absorption refrigerator.Â  Other industries and office building may have a need to generate heat on site, but have less use for the electricity, in which case they can either use that electric power themselves, or sell it back to the electric grid.Â  The bottom line is that with some ingenuity and care, cogeneration provides the most power per unit of fuel by taking advantage of every product and byproduct of power generation. 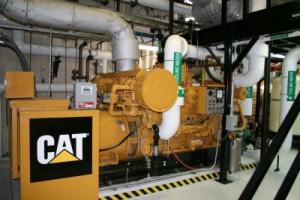 If you or your company would like improve your energy efficiency by utilizing cogeneration, please contact us at sales@impcorporation.com or (800)965-0994, and one of our power generation experts will be happy to help.

This profile is sponsored byÂ Self Improvement from SelfGrowth.com